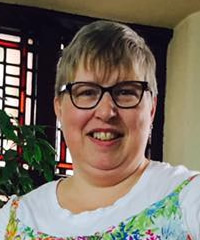 I live in Manchester and work for The Methodist Church as an Administrator for Manchester Circuit and Manchester & Stockport District from an office based at The Wesley Centre in Hulme. I was brought up an Anglican, attending Explorers and Pathfinders at St Clement’s Higher Openshaw, Manchester, and becoming a Christian in my teens at Youth Camp in Pooley Bridge, Cumbria. I now worship at Droylsden Methodist. I am a trustee for a local LEP in Gorton and the Nexus Arts Café.

I also work a couple of afternoons a week at Methodist International House in Victoria Park, Manchester.

My name is Nicola Reynolds and I am a Supernumery (retired) Methodist Minister in the Solway Methodist Circuit which is on the west coast of Cumbria.

I found that in Cumbria a considerable amount of work was being developed through Churches Together in Cumbria (CTiC) and with the Church Leaders in the county. When I became a Supernumery Minister, I was asked to take on the role of the Methodist District Ecumenical Officer for Cumbria and was asked if I would also become part of the Strategy Steering Group for the ‘God for All’ initiative that the Church Leaders were setting in motion. Throughout my life I have been passionate that all God’s Church should relish the gifts each denomination brings to our lives as God’s people. I offered to become a Covenant Champion as I am aware that great things can develop from small steps.

Church of England
The Methodist Church